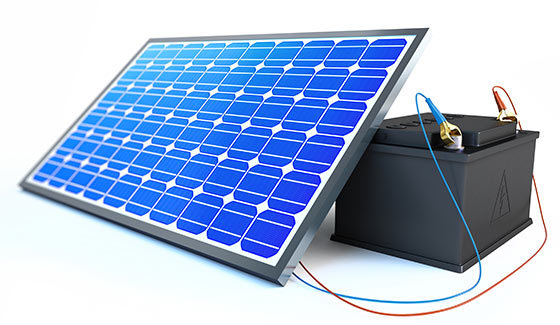 Home Battery Storage Buying Guide
Last updated 9:23 pm, Sunday 12th November 2017
Actions...
Tweet
Household rooftop solar can be a great way to generate some of your own power, and potentially save money off your electrical bill. Thanks to recent technology improvements and price reductions, home battery storage makes it possible to store the sun’s energy and use it again at night. But as more and more players enter the market, which option is right for you?
For those who like to cut to the chase, the current winner of the ‘best’ battery is the Tesla Powerwall 2. Many other batteries offer compelling advantages, but have difficultly competing with its excellent cost for the capacity; for now...
For those who want to delve into calculating the actual economic return, skip to the end of this guide, where we have included some info. For those who want to know the steps to take to get to home battery storage nirvana, please read on.

The underlying concept is simple. For a large upfront cost, solar panels can generate ‘free’ electricity, but of course they don’t work at night. Alternatively, off-peak power is much cheaper, but it is only available in the middle of the night.
A typical household tends to use its most power in the morning, and then again in the evening, which does not line up that well with solar or off-peak power.
Now some electricity providers are moving towards time of day metering, where peak times (those mornings and evenings) are charged at a higher rate.
This is where battery storage comes in, by allowing homes to store some of the solar power, or cheap off-peak power, and then using this saved power at other times. With the right setup, storing and using the solar from off-peak is cheaper than buying the more expensive power during peaks times.
Some battery storage systems can also work as backups during a blackout, so you do not lose power. The issue right now is that the economics of battery storage, vs just buying from the grid are not yet breaking even, so it’s not just a no brainer upgrade.
The battery storage method has been around for ages, but it wasn’t until Tesla pushed battery prices lower and produced an all in one product that the wider community took notice. Now, as the market has grown, there are quite a few alternatives with their own unique features, all competing for a share of the market.
To make things even more complex, home battery storage can be implemented in a multitude of ways. Combined with every household, not to mention location, being different when it comes to solar, batteries and energy use; making sure your system is worth the investment, let alone getting the most from it, is not that straightforward.

Electricity is often measured and billed in kWh (kilowatt hours), which is how many kilowatts (thousands of watts) are used in an hour. For example, your power bill will give kWh figures - either for daily use, or over the billing period.
Note: A daily use figure of 10 kWh doesn’t mean you used 10 kW in one hour – rather the equivalent of 10 kw in one hour, but spread throughout the day. Appliances ratings are a little different – typically using a rating in Watts. For example, a 2000 W heater uses 2 kW each hour - so 2 hours use a day will add 4 kWh to your power bill. Battery storage capacities are also rated in kWh - for example, the Tesla Powerwall has a 14 kWh capacity. That means it can could run the 2 kW heater for 7 hours, or a 0.5 KW computer for 28 hours - assuming no losses...
Raw battery capacity ratings are a bit misleading, as the available useful capacity is often lower. You also lose some of the stored power through losses each time it is charged or discharged. As any smartphone owner knows, batteries don’t hold charge as well when they get older, and home storage options are no different. Typically, the batteries have a warranty which will define how many total kWh the battery is guaranteed to produce over a set period. For example, the Powerwall 2 is rated for 37,800 kWh over its 10-year warranty period. That works out at 10.36 kWh average capacity - quite a bit lower than the advertised 14 kWh capacity. Although there are a few battery storage technologies out there which don't have this charge/discharge memory effect, most batteries capacity will decrease over time.
To sensibly compare batteries, and make a well informed decision, we need to put them on a level playing field. The most common way is using price per warrantied capacity. For example, the Powerwall 2 has a 37,800 kWh warrantied capacity, and costs (without install) $8750 on the Tesla website. Dividing the cost by the capacity gives us a price of $0.23 per kWh. If you look at our Battery Comparison Table, we provide this figure for you.
The other aspect of the battery ratings is how the power is delivered. For example, a 14 kWh battery can’t supply all of that 14 kW in a single hour. There is another rating of how much power can be delivered each hour - typically as a lower continuous figure and a peak figure. For example, the Powerwall 2 can supply 5 kW continuously, and 7 kW peak for just 10 seconds. So, it could run a 2 kW heater, a 2.4 kW air-conditioner, and still delivery another 0.6 kW to run your TV, lights and other appliances. The higher peak rating is there to handle small surges, such as the extra power required when a refrigerator turns on.

How Much Battery Capacity is Needed?

The available storage options of a battery vary in capacity, from small through to large. Sizing to your usage is important, because any unused capacity is wasted savings. For example, the Tesla Powerwall 2 has a 14 kWh (10.36 kWh average real world) capacity. Depending on the battery and system, it can be relatively easy to expand the capacity later on by adding more batteries.
To get a more accurate indication of how your power use is spread across the day, the best way is to use some sort of monitoring device. Then you can calculate how much power is used from Sunset to Sunrise, and size your battery accordingly.

Home battery storage needs to be charged, either using solar, or off-peak power. It is possible to incorporate both, but that is a complex issue that requires help from an installer. Mostly though, households charge their battery storage with solar - either from a new installation, or from existing solar panels.
For a new install of both solar and a battery, an inverter is used to connect your solar panels to the battery, and the connection to the grid are included. Older existing solar systems already have an inverter, but usually it can’t interface with the battery and will need replacing. Also not all existing solar installs will be large enough to charge a high capacity battery, so might also be need upgrading.

Due to the electric car industry, Lithium-ion batteries have seen rapid improvements as well as cost reductions, and are used in most battery storage systems. They offer the lowest prices, but they do lose capacity over time and while it is rare, can catch fire and explode.
Another type of battery technology is one called Flow Batteries, which uses a pumped liquid to chemically store the energy. Flow batteries are currently more expensive, but have better storage, safety, extreme temperature handling and refurbishment characteristics and are often warranted the same as Lithium-ion. They also do not suffer from charge/discharge degradation, so can be completely discharged without ill effect.
Quite rare are Sodium Nickel Chloride batteries, which are expensive and have a low lifespan, but handle temperature extremes well, have a low fire risk and are recyclable.
Until recently, most battery storage systems used Lead Acid battery technology for its lower cost. But the batteries have limited lifespan, are bulky and heavy, can be a fire risk and are easily affected by temperature.

Getting The Most From Battery Storage

Adding a storage battery is only part of the equation - what you do with it is as important. An under appreciated aspect of the battery storage technology is that it provides a way for users to track, and more importantly, change their usage habits. Especially as time of day power billing becomes common, huge savings can be had by simply using electricity in smart ways.
Another big factor is effectively using excess solar power, which can have a large impact on savings. While generated solar that is not used to charge a battery can be sold back to the grid, the better option is to just use the electricity directly. The problem with this is, that in general, peak generation is during the middle of the day. But some households have high power uses from pool pumps, which can be timed to run during the day. Other smart home systems allow scheduling and remote control of appliances, such as running dishwashers and clothes dryers during the day, heating water, or letting your air conditioning run for a few hours in the afternoon to pre-cool a hot house in Summer.
As battery storage becomes popular, other companies are providing complementary technology that gives further benefits. For example, Reposit Power has a system that learns your usage patterns and helps manage your solar and battery.

For many households, fixed line charges are a large portion of their power bills. So why not save even more money, and go entirely off grid? This is a great idea, and can work well in rural areas where the cost to have mains power installed is very high.
But for your typical suburban home, the cost would be around 3 times that a battery storage system, due to needing extra capacity to handle long periods of bad weather. There can also be issues with having enough space for the extra solar panels.

The Bottom Line on Battery Storage

Home battery storage is amazing, and the technology is well worth investing in as a whole. Although on a personal level, the economics are still a long way off it being a no brainer investment for most households. That being said, there are many non-economic benefits, especially changing usage habits, which can make home battery storage tech worth its while.
A great resource for further understanding is our section on Batteries and Solar which contains up to date news, articles and online tools to assist you.

Find what you were looking for?.. Not quite what you expected?.. Got a question to ask people?
Share your thoughts and use the form below to post a public comment right on this page.
Back to the Articles Index Page   Visit our Facebook page