Solar Power, what is it and how Solar Power works

Solar Power refers to the process of harvesting the Sun's energy (transmitted via light as solar energy) into an energy source, such as electricity. Solar power can be converted into other energy forms, like steam,  but often in the residential setting direct conversion into electrical energy is used.

Whether bought and installed at home or at the office, most solar powered systems consist of up to three main parts: a solar collector (i.e. the solar panels), an inverter and optionally a charge controller and battery set if you are operating 'off the grid'; i.e. without mains power supply. The diagrammatic form of this is shown below. 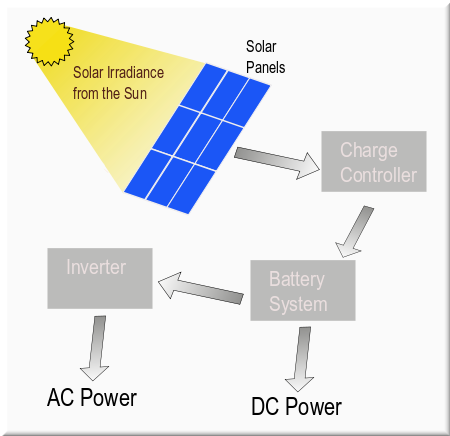 The solar collector, usually photo voltaic (PV), otherwise known as solar panels, convert the solar energy from the Sun into electricity. The solar panels are rated by peak power output measured in Watts.

Solar Panels come in many different forms, often varying in efficiency in relation to the initial cost outlay. The three main types of solar panel are described below:

Amorphous based solar cells are often used for small solar panels, such as in calculators. The individual cells are not distinctly visible as they form part of a thin film on another material. Amorphous cells are less power efficient (up to 6.5%) then mono- and polycrystalline cells but their quality is constantly improving, so at the moment their big advantage is lower cost.

Mono-crystalline solar panels are based on individual 'cells' each a slice of a silicon crystal processed to act as a solar collector. These individual cells are wired together as a set to make the overall rated wattage for the whole panel. You can often tell a mono-crystal by the circular nature of the individual cells, leading to gaps between them at the corners.

The recorded highest power efficiency for mono-crystalline solar panels was set in February 2009 by Mitsubishi Electric Corporation at 18.9%. This type of panel is also the most reliable and often the solar panel used for homes.

Solar panels most often produce a 'nominal' 12v DC output or multiples there of (i.e. 12 volt solar panels, 24 volt solar panels, etc) - the actual stated peak voltage will be about 40% higher than this at peak watt power output - assuming ideal solar conditions. Such a varying voltage depending on the solar conditions is not that useful for today's devices that often require a precise AC supply at much high voltages, usually either 240 volt or 120 volt.. Now you can put solar panels together in series to get to around this voltage, but it would be in DC and highly unstable as to the exact voltage at any given time...

So, this is where the inverter comes in. Its job is to take a 'nominal' 12 volt (or maybe 24 volt) from the solar panels (with a high Current level) and converts and 'smooths' it into a regular AC voltage output for mains devices..  What basically happens inside it is that the voltage is stepped up in return for reducing the current (Power equals voltage times current, or P=IV); usually with a small loss of power efficiency along the way. If you are connected to the mains grid, the other function the inverter can do is to synchronize the AC produced from the inverter with the AC of the mains supply.

Off the grid installations

When you are solely using solar power to operate your electrical devices, when the Sun goes down you have no power! So to get round this an off the grid installation is so scaled so that enough power is harvested during the day to provide power to your mains devices and enough is spare to charge up a rack of batteries to provide power at night.

Although this is not as simple as it sounds. Typically lead acid batteries are used to provide the storage, these as well as being expensive & heavy need to be charged in a very precise way. If overcharged they tend to 'gas off' and corrode internally, which shortens their lifespan and capacity. If undercharged or overdrawn, they tend to loose capacity also..  So often a dedicated battery charger unit (often known as a controller) is required to 'manage' the batteries for you and provide safeguards against such bad charging.

You can also get solar controllers which will deal with managing the power from the solar panels and where to route it depending on demand. These can also often deal with battery charging, and possibly be configured to 'fire up' a back-up generator if the solar panels or batteries prove unable to meet the demand.

In most residential situations a grid connected system would be most suitable, for several reasons:
Sometimes people operate grid connected systems with batteries, on the basis that the excess power is first used to charge the batteries, then is fed into the grid. The only real benefit with this is if you suffer a power grid outage at night, you will still have power. Although do be careful to make sure the batteries are rated for such work (i.e. being left fully charged the majority of the time).


Should I trade in my RECs?

Most countries now have RECs (Renewable Energy Certificates) or equivalent schemes. Basically it is a mechanism for attributing the cost of greenhouse gas emissions to be offset against a none or lesser greenhouse gas producing energy source - such as solar panels or wind power which produce renewable energy. The idea is that green house gas producers need to buy REC's to keep their net pollution below their allocated threshold. So if you sell all your REC's in effect, from the environments point of view, its a zero sum game (i.e. pollution generated balances against pollution stopped). So instead of making a net 'green' contribution to the environment you just keeping the status quo...

Now if you do not trade in your REC's, what happens? Well for starters, the buyers of REC's will need to go elsewhere - so by you keeping those REC's you change the game from being zero sum to pollution negative (i.e. you have voted against allowing your green power to be offset against the pollution generated). Also by reducing the number of REC's in the market, supply and demand dictates that for the buyers the cost of those REC's are more likely to go up.. Of course by not trading in your REC's your initial cost will be much higher. Or look at this another way, the amount you paid after trading in your REC's is in effect a subsidy cost benefiting the pollution producer, i.e. its your 'sunk cost' to allow them to pollute!

Also in Australia there is now a multiplier scheme in place, i.e. 5x the normal number of REC's on a qualifying system - what this means is that for the same 'physical' amount of carbon reduction its having 5 times the offset effect in the market! So basically the REC market is getting flooded with cheap RECs, distorting the whole process for years to come... Which indicates two things: 1) how little people really understand whats going on with the REC marketplace, and 2) that the government has been 'hoodwinked' by big business into making polluting cheap for them.

At the moment bug business is busy doing what ever it can to buy up these cheap REC's; as with an increasing focus on green house gas emissions and the REC scheme being applied to more market sectors, the financial value of these REC's can only really go up in the longer term... REC's are completely tradable in a global market remember..

The other thing with REC's that is actually quite nasty, is that it allows the pollution producers to 'defer' to some late time actually changing their ways to pollute less directly - in effect it gives them a license to pollute to how many REC's they can purchase from the market. In effect they have no real 'incentive' to directly change...

Apparently it has been reported in the main stream press (AFR) that the REC market is now flooded with cheap REC's ($50 per Mega Watt down to $30) due to the $1600 solar hot water subsidy causing a spike in demand. This has perturbed the market so much that large scale wind power projects are unable to compete in the energy market and are not being built. The end result is that the current energy producers have less 'green' competition to deal with; and this was not foreseen...

How solar panels are configured to provide the most power output is quite important, you need to think about the following:
As regards how the solar panels are mounted they usually come in three forms:
One important consideration when mounting on a roof is to make sure that the back of panels have adequate clearance to cool - if the panel itself gets too hot it progressively losses efficiency. You will need a minimum of 100mm clearance behind the panels to ensure sufficient cooling. Also having this clearance is a good idea anyways, as it stops leaves and other 'junk' accumulating behind the panels and becoming a fire risk (bad news in Australia!).

NEW We have just put together an online solar calculator to help you work out the number of panels you will need.

NEW We have also just put together a cable gauge calculator to help working out the size of wiring required from your solar panels to either the battery or inverter.

NEW We also have a Financial Calaculator for working out the potential gain from a quote on the installation of a solar system.

Something to be very careful with is that a lot of installers are saying their systems are 'guaranteed' for 25 or 30 years. Do please check the following:

One thing you will soon notice doing the maths on your power consumption is how much power does get consumed without you noticing! This comes from several sources:
We suggest you have a good look around your house and before making a decision on whether to go solar, see what you can just turn off and measure your power consumption then..

You don't need to go the 'whole hog' to get benefit from solar power, especially when trying to use solar around the home. Consider these usage cases:

Big question - it really comes down to two things:
Everybody is very focused at the moment on green house gas emissions but we think this is missing the point - there is a very large 'embedded cost' element in having services, like electricity, supplied to your house or business. This has a general environmental impact in consumption of materials. Therefore if one is able to operate 'without' the grid that cost does not get incurred, but if you already have the grid to your house, the cost has already been incurred, so going solar will not change that one bit.

Note: Solar panels in of themselves should not be considered to increase the value of your property; given the rate of improvement in the underlying technology (and the reducing cost base) the current generation of solar panels are likely to be superseded by cheaper and more effective panels in the future. It is very likely the intrinsic value of the panels will decrease over time, you should factor this into your financial calculations.

Solar Power - the facts about setting up Solar Power

Find what you were looking for?.. Not quite what you expected?.. Got a question to ask people?
Share your thoughts and use the form below to post a public comment right on this page.
Back to the Articles Index Page   Visit our Facebook page